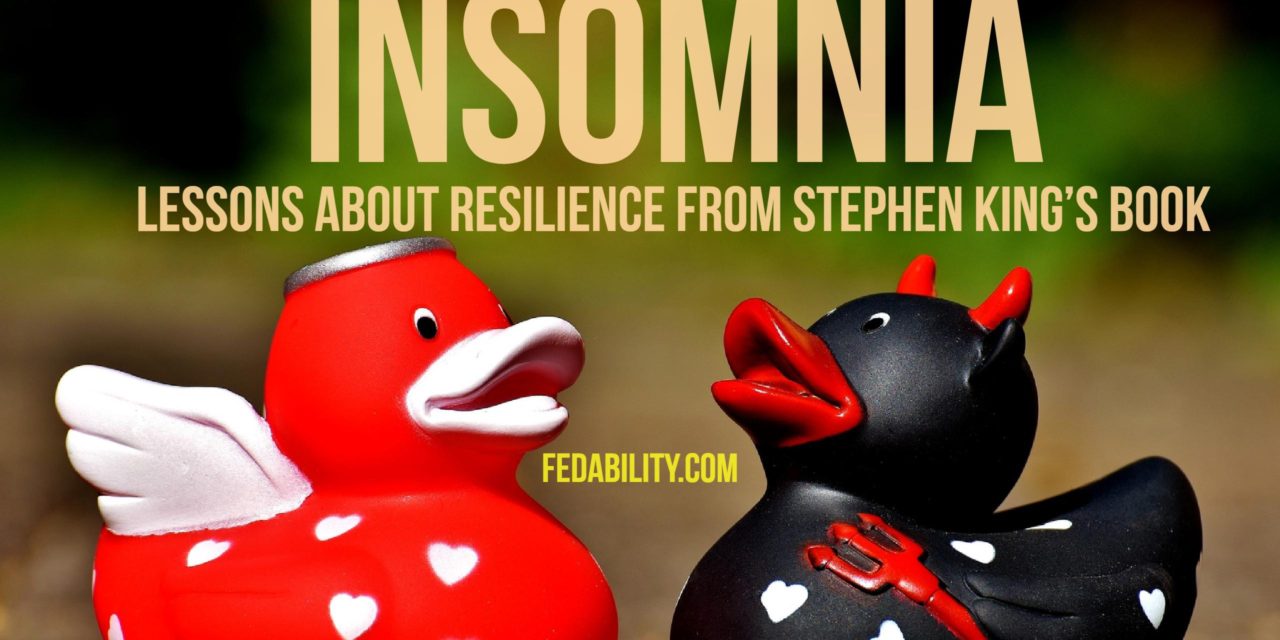 When I picked up a copy of Insomnia by Stephen King

, I didn’t expect to get lessons about resilience  But I did. And, I wanted to share 4 take-aways I gained.

First, here’s a quick summary of the book.

Unbeknownst to each other, the two main characters find themselves getting progressively getting less sleep – waking earlier each morning than the day before. As time goes on, they begin seeing auras of those around them. They also start being able to ‘feel’ the thoughts and feelings of those around them. Both wonder if they’re going crazy and worry they may never get a good night’s rest again.

Neither of them admitted to those around them just how bad things had gotten. While both eventually sought out professional help for their insomnia, they didn’t look for the social support around them. It wasn’t until things had progressed rather far into their ‘illness’ that they accidentally discovered each other were suffering from the same problem. Once they discovered this was the case, they were able to share their experiences and help each other as the ‘illness’ progressed.

Many of us work very hard to maintain an image of strength. But sometimes, this is to the detriment of ourselves and those around us.

I’m not talking about wearing your heart on your sleeve. Nor am I talking about telling everyone how stressed you are or boo-hoo-hoo-ing.

I’m talking about talking to people about what you’re experiencing. Asking for advice. Working together to find solutions. Sharing lessons learned. If nothing else, finding a good mentor or coach could also help immensely.

2. They were willing to tap into other’s energy.

If you’ve read the book or plan to, this part does get a little weird. But, here it goes anyway.

What they learned from other characters was that humans have as much energy as all the grains of sand in the ocean. And that to take the energy of others didn’t reduce the energy of their friends.

This was an interesting point because we often don’t request help because we don’t want to burden others.

But what Insomnia teaches us is that it’s ok to lean on others. That to let ourselves suffer alone, to allow our energy to be depleted, makes us less able to protect others.

So let people help you. Don’t assume you are a burden that someone isn’t able to bare.

3. Sometimes things happen for a purpose, but sometimes it’s random.

Remembering this is a Stephen King book, you have to remember it’s going to be kind of weird. But stick with me here.

There’s these little alien-angel-higher being characters.

Some are in support of the Purpose. That is, helping people pass on when their time has come and their purpose has been served.

There’s another character in support of the Random. This character takes people through seeming random accidents before their purpose has been served. Admittedly, that character is really quite evil.

In the book, the Purpose is usually the reason things happened. But other times, it was the Random that caused things to happen. When Random was involved, there was no rhyme or reason.

When something goes wrong in our lives, we’re often told that it happened for a reason. That something good will come out of it. This is to give us solace. To give us hope. And, to remind us that we don’t always know best.

I think the lesson here is that sometimes bad things happen. We make terrible mistakes. Sometimes we hurt each other. But that we can and should forgive ourselves.

4. We need to look deeply to truly understand.

The two main characters were able to see the auras around others. While the auras were usually healthy blues and greens, they sometimes sparked other colors. Red and orange might show up when someone was feeling fear or anger. Blackness would show when there was an illness within the person.

By being able to see those auras, the characters in Insomnia were better able to interpret the behaviors of others.  They had greater empathy as a result.

The characters came to believe that the ability to see these auras did not come from a supernatural place. But rather that their exhaustion had allowed them to become more sensitive to the world around them. They believed that humans chose not to be sensitive enough to see the auras of those around them.

By no means am I encouraging extreme exhaustion. Rather, I think the book reinforced the idea that we sometimes choose not to see each other deeply. We chose not to consider that someone may be fearful or sick. Instead, we prefer to think of the other person as a jerk. To assume they have bad intentions.

But as Covey says in The 7 Habits of Highly Effective People: Powerful Lessons in Personal Change

, we must seek first to understand.

I hope you found some value in a different take on a Stephen King book and gained some insights into how to further build your resilience. Check out our other posts on resilience.

What’s the rush? Tips to recharge your resilience and reconsider priorities

If you click through either of the images below and purchase one of the books, I will receive a small commission. 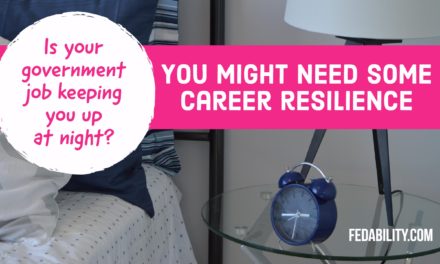 Government job stress keeping you up at night? You need career resilience and self reliance 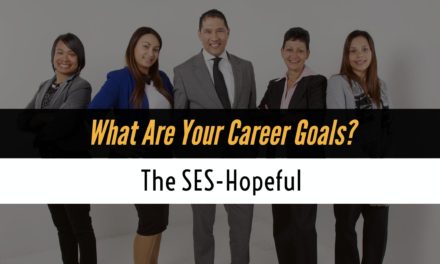 What are your career goals? Developing a SES-Hopeful 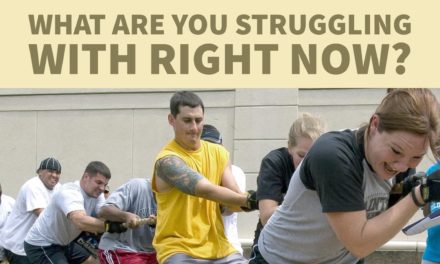 Struggle with a job you aren’t happy in? Why you aren’t looking for another job. 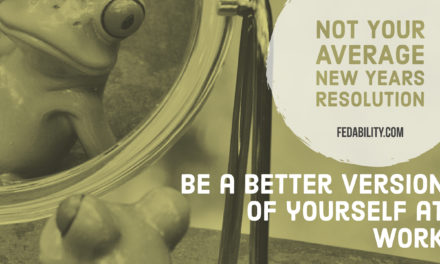 Why not resolve to be a better version of yourself at work?